A new hotspot is now located on top of the Sirocco building, Mooloolaba. It is simply tacked onto a 2.4GHz to 5.8GHz wireless bridge - had a spare wireless interface so I decided to use it.

It is currently attached to a 15dBi Yagi antenna pointing west. This should offer coverage to the new buildings located on the 'mountain view' side of the Sirocco building. I will look at replacing this antenna with a 180° sector with a down tilt bracket.

While this hotspot is running the same system as the various Maroochy hotspots I have in place, it wasn't requested by the Maroochy Shire Council. I will change it over to an alternative interface as soon as I've completed all the changes.

I have been slowly revamping my hotspot user interface. It's okay, but I can see that it needs a considerable amount of improvement and I should be making it a lot more modular. I guess I'm just trying to get something that works out into production first and then work on re-writing large chunks of code into reusable modules. I should also be rolling it up into a nice installer... 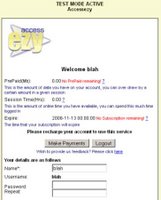