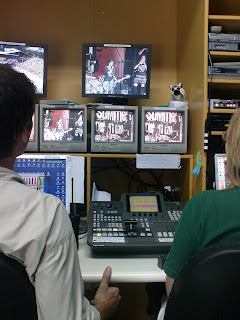 Here's a picture of the A/V crew operating the two remote PTZ cameras and 'house' audio gear during the Veronica's gig at Australia Zoo.

The panel between them is the Panasonic Visual Mixing desk. The smaller monitors are the cameras and the screen on the top is what's currently showing on the big screen (a rather large Panasonic LED screen outside).
Posted by Ben at 9:32 am No comments:

Today I finally set up my little public access wireless network at home. I've had a Mikrotik RB133 with RB52 and Senao radios laying around in an outdoor box for sometime now. Today I fixed up the roof cable run and installed it on my existing mast with Cisco 21dBi solid dish.

I used a homebrew 8dBi collinear omni-directional antenna for the public side (Senao 200mW/23dBm) radio - that puts output at around 30dBi in a 360°H/25°V area. I've set up a rudimentary hotspot service on the interface - I will set it up with PayPal etc shortly so the neighbors can gain ad-hoc internet access and not feel guilty for it. Not everyone wants to pay for a permanent connection unbelievable huh.

I attached the dish to the RB52 radio which is adjustable - so I'll set that down to give no more than the regulated 36dBi. I'm hoping to establish a Point-to-Point link to a friend in Buderim. Failing that maybe a repeater link via Kiel Mountain which sits in between. Mainly to share links and to muck around with routing etc.

I'll go for a cruise around the local area and see how much coverage my little 8dBi is providing - might even be able to pick it up at Kiel Mt with the laptop radio...
Posted by Ben at 10:40 pm 2 comments:

How things move slower the lager the enterprise. Might have to start pushing to get things done faster and more efficiently in future.

I installed the last two Access Points in from the first batch of six we received all those months ago. I guess a fairly large hold up was the flaky firmware of the Symbol WS5100 I mentioned earlier. It's going very nicely now and I can't wait to start tweaking it and including it into a radius/ldap domain.

One AP was installed in the main warehouse and another under the Taj for coverage of the main hallways. Both work quite well using the supplied 6dBi collinear antennas.

Today a 9dBi collinear from the RFShop arrived with two made up cables to suit the AP300. Another three access points will be ordered shortly to provide coverage of the Foodcourt - using the new 9dBi, open area between the warehouse and Taj - using existing 10dBi yagi and indoors are at the Croc's Lair shop - AP with integrated antennas. That will be the coverage are for now with the possibility of a few more sites later on.

Almost 6mths in the making and the completion date is within sight. The last week I have sorted out the issue Mooloolaba Travel were having with running their VPN to Galileo running over the new Telstra WAN. It simply wasn't connecting. Discovered that the 1-to-1 NAT addressing that was also used for IPSec and PPTP traffic did not like traffic coming from the direction of Mooloolaba. So they changed it to a Many-to-1 NAT and things are looking good apart from frequent dropouts of the IPSec VPN which I believe are due to the 'keepalives' being blocked - so I turned them off and I will see what happens.

WhaleOne still hasn't been changed over. I had a 3hr crack at it today with all the information I had scrounged from Telstra and the 'net in general. Turns out that their NextG account hasn't yet been set up for use with the IP WAN. What happens is that the APN Name changes from 'telstra.internet' to 'telstra.corp' and this dictates the gateway used for the connection. Before this can occur the SIM card/Account needs to be set up so that the calls are allowed through or something along those lines anyway - the request goes to the Telstra Mobile team. Hopefully it will be fixed up by Tuesday next week.

Ages ago I talked about building a mythbox out of a Epia M10000. Well last weekend I finally did it. Epia support is quite good with linux these days, it was easy to set up Mythbuntu on the box and have it connect to the existing Soltek Qbic 3401 Mythbox. It runs okay apart from stutter after a channel change for about 5 minutes - I think more RAM will fix that.

I might upgrade my PC and use the old bits to build a better backend someday.
Posted by Ben at 9:16 pm 1 comment: