To Canberra I go

Once again I find myself waiting to leave for Brisbane airport to leave to some far away land, well, kinda far away, further than I normally go anyway. This time we're going to Canberra, where our esteemed federal government resides. I'm going to have to restrain myself from doing something silly like throwing a urine filled water bomb at the prime minister - he's on holidays now so I guess the chance won't arise anyway.

I will be installing stuff at two locations - Quality Inn Dickson and Quality Inn Woden. So if you find yourself in dire need of in-room Internet access while staying in Canberra, then those are the two places to try. Both sites are Ethernet type installations, fairly simple and straight forward as long as the cabling is done correctly and the distances between the MDF and rooms isn't huge.

The lead up to this trip was just as disorganised and stressful as the Cairns trip. No one thinks ahead very far and given that they don't think of anyone else either. I just configured the two Cisco SOHO97 DSL routers and two Colubris MSC3200 this morning when the Telstra DSL activation info came in - the day before the installation will take place... I've already put in place procedures that will prevent such issues in future - basically making sure the sales people hand off all technical tasks to the technical people, one would think that was expected, but obviously not.

Don't know what airline I'm flying with, I'm hoping Virgin given the last Jetstar flight from Cairns. Although I did appreciate that Jetstar provide you with fragile (aka, don't play tarmac footy with this one) tags for your laptop bag etc when booking it on as baggage - although Virgin could be treating all baggage as fragile...

I'm currently reading a book about the Australian SAS - The Amazing SAS: The inside story of Australia's Special Forces. It provides good insight to what our leet lads get up to and how they operate. Although the book could do without the stupid Liberal/Howard government propaganda bullshit - personally I don't see any need for it given the subject, what ever happened to the abstraction between the government and the military? Anyway, I won't be too critical until I've read a few other books about the subject, however I have read a few books about the British SAS and there wasn't any mention about their government apart from what was necessary to explain the finer points.
Posted by Ben at 3:00 pm 1 comment:

So here I am sitting in my motel room at the Best Western Cairns. It's a nice motel, I recommend it - room rates start at $89.00 per night.

As you know we arrived here yesterday afternoon at 3:45pm - the plane was 15min early. I like bigger planes, the VirginBlue Boeing 737-400 was far more comfortable to fly in compared to the Metro I flew to Coffs Harbour in. Having hot air hostesses to perv on is definitely a big plus in my book anyway.

After checking in at the Motel we passed the rest of the afternoon sticking Ethernet cables in these holder thingies - merely a better way of presenting them to guests. Once we were done with that we drove over to the CBD and had a walk about the place. They must have known I was coming that night so they put on a big Christmas show with song and dance and hot chicks wearing translucent tight white pants with g-strings. I couldn't remember what they were singing, carols I think.

Neil suggested an Italian place to have dinner, and while we were looking at the menu a nice chap having dinner with his wife said they had great food and that they were regulars. I discovered that they were the owner of the Paronella Park tourist attraction located just south of Innisfail. I had been there about three times, and was amazed that I was dining with the owners many years later. They provided me with a free group pass for when I head up there on holiday over new years - I'm chuffed.

Anyway, the Italian restaurant is called LA Fettuccina and I highly recommend it to anyone who happens to find themselves in Cairns hungry. Excellent food, great service and don't forget to have the Gelati with a port - best dining experience to date I reckon.

Today was fairly smooth, all the equipment got installed as expected. Although the maintenance guy didn't stay around long enough for me to brief him on what was required - I mentioned to him what was needed to be done but I guess he felt he didn't need to be shown. As it turns out I'll have to make another short trip up here again in the very near future to complete these two jobs - so I can finalize any loose ends then. Hopefully no one will steal the adaptors between now and when they're fixed to the walls.

I spend dinner with Neil and a Mr R Spencer, who is one of the seven Cairns Magistrates. He had some good stories to tell, although be it that they were a bit sickening - I admire the resilience of our public legal system and the shit they must have to put up with on a daily basis. We had dinner at a Turkish place just across the road from La Fettuccina. It was okay, although I had higher expectations from lastnights experience.

Tomorrow the sparky we're working with is going to pick me up at 8am (*groan*) and drag me out to Trinity bay where we'll install Sea Change Beach Front Apartments. Should turn out pretty much the same - however there are no adaptors to install into each room, just a cable and holder.

Wednesday we'll be doing a few sales/site surveys in the morning and then flying out that afternoon. More about that later I hope.

The last two days were spent in Coffs harbor. It was actually my third journey into New South Wales this lifetime, although the first two trips were to Armidale to visit family.

The trip started with Neil calling me the morning we were due to go to the Air Port saying that I was the one driving, not him as was originally planned. I don't know why I let other people plan my engagements. So eventually we make it to the Brisbane Airport where I managed to make it to the coffee shop at the Gate 1,2,3 departure lounge before the lack of caffeine claimed my life. I must say the two young ladies running the show were both attractive - and effective barristas. I can make this safe judgment because the plane was 30min late because of 'technical issues' - I took advantage of the coffee facilities.

Once the airline was prepared to test out their newly repaired plane on me, they herded us onto a bus to drive the 100m out to where the Fairchild 'drain pipe' Metro 3/23 awaited. At that point it was starting to rain - it made take off a bit more interesting as a cross-wind had kicked up a bit and caused the small aircraft to float around a bit just after the wheels left the ground. Apart from that the flight was okay. I will have to say that the Etymotic ER-6i Canalphones worked flawlessly at blocking out most of the noise generated by those 700kW Garret Turboprops.

Once we arrived at the Coffs harbor Airport we hired a small Toyota Corolla hatch and buzzed over to the 'Jetty' for a quick peak at the ocean. I must say I was taken back by the beauty of the 'cove' like shoreline of the far eastern coasts of Australia; I think I rather them than beaches. We then proceeded down the coast to the Opal Cove Resort for one reason or another, we really didn't need to go there then - another reason why I like to make my own arrangements. After doing nothing of much use there we went off to what would become my home for the night - the Zebra Motel.

The Zebra Motel is a Best Western property consisting of two 2-story buildings in a L shaped configuration that host 46 rooms. The two buildings wrap around a central reception/restaurant building, with car parks separating each. Yes you guessed it, its like every other Motel on the planet. The theme of this particular motel was that it had a African style - like the restaurant was called 'Zulu's' and there are was African paraphernalia littered around the place. We were there to sell a VDSL (Very-High-Bit-Rate Digital Subscriber Line) HSIA (High Speed Internet Access) solution to them. Oddly enough, they seemed quite interested and we might hear back from them in 5 - 6mths time. They had only acquired the place two weeks earlier. The bed was comfortable.

Neil got to stay at the Opal Cove resort, it only costs $10 more than the motel and honestly the rooms were pretty much identical. However the resort had all the resort type things like grossly overpriced food and drinks, stupid games and a view that you would kill small, cute kittens for. The cove was a wonderful setting between two enormous bordering rocky cliffs and a perfect beach with a small estuary placed perfectly near one of the rocky cliffs on the northern side. The resort consisted of 135 rooms with 6 conference rooms, a wedding/function room, huge multi-level reception that included the restaurant/bar and games areas. All with ocean views (bar the conference rooms). They too were interested in our VDSL solution and wants everything done by Christmas - no chance of that happening as far as I'm technically concerned but hey, who am I to dispute that...

I liked Coffs harbor for its beauty, both the seaside and hinterland. Its still a small town, surrounded by little seaside villages and in-land hamlets. I could probably spend a few days there checking things out in more detail and possibly hunt down some decent size block of land to plunder when money permits later on. You are bound to drive though it if you're migrating up or down the far eastern coast, I recommend you stop for a bit.

The flight back was better than the first, however due to 'weight restrictions' our luggage was left behind for the next flight to pick up. I received that via freight at lunchtime today. Lucky I kept my car keys on my person and didn't do the usual thing of throwing them into my bags. 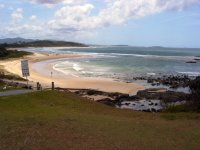 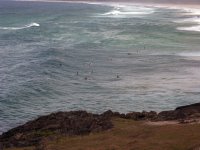 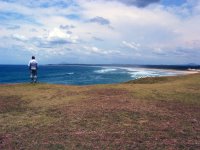 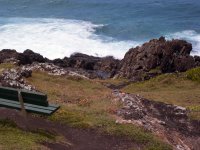 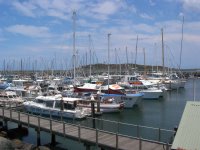