Don and I have recently installed a wireless repeater at the Cotton Tree Caravan park Maroochydore. This is to boost the existing signal from the main Access Point at the Administration Building to the western parts of the park.

Now only a small black spot is remaining near the South West corner - we will have to gauge demand to see if installing another repeater is feasible.

The repeater is a simple Netgear WG102 Access Point configured as a WDS repeater. The antenna we used for this install is a Hills 4+4 slot (double sided) wave guide. The WG102 is a nifty little Access Point - it supports all the necessary standards and has a excellent feature set for its size and cost ($200RRP AUD). It also supports 802.3af compliant Power over Ethernet - we had to use a Linksys POE12 kit ($100RRP) with it as Netgear doesn't supply anything similar.

I housed the WG102 in a small weather proof enclosure which is screwed directly to the antenna mast.

All up it was a fairly simple exercise and didn't cost all that much - about $800 in total. Took us 3hrs to do the install. Making it all neat and using conduit etc is what takes the most time. 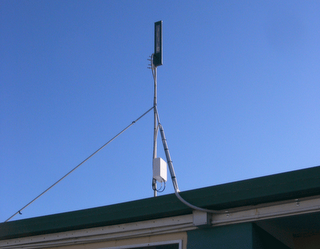 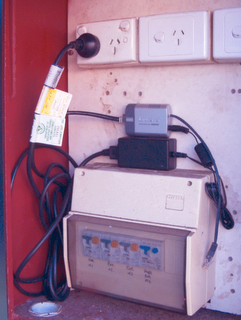 Here is a chart generated from the database via some query wizardry (and sadly, MS Excel)... 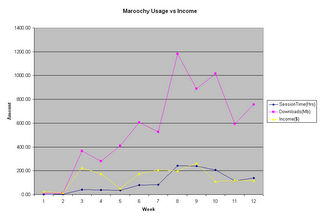 Quick run down on what's happening.

Mudjimba Caravan park installation is progressing slowly. Mainly because it is tied up with some silly in building cabling requirement. So the AP won't be installed until the cabling has been done. The AP will be the actual Hotspot/WRAP2 one so the hotspot service will be available throughout most of the Mudjimba beach area. The Caravan park will be using a Netgear WG102 AP set to WDS repeater.

Colubris have been in contact with me regarding the non-standard use of radius attribute values. I've provided them with comparisons with Cisco products etc - they still want more details such as packet captures :/ Odd how I'm expected to prove to them that they're off standard, I'M THE ONE PAYING FOR THE PRODUCT.

Soon I will possess a few newer ThinLinx devices that are considerably less buggy than these test units we currently have. So I will be posting a mini-review on those soon.

Paul from Yawarra has informed me that he's getting closer to having a few functional Commell LE-564 and LE-565 Embedded Industrial i386 platforms to sell to the Australian market. I will be using them as PPPoE Access Concentrator for in-building subscriber networks. Also I will use them as mini-servers to host AAA services to these buildings - so it will be a turn key package, I hope.

Maybe one day I won't need a central backend service - just have many little ones distributed across multiple sites. The backend will simply turn into a monitoring and administration thing. Have to figgure out the best way to get FreeBSD operating well on these little devices and self update from a central package repository. Shouldn't be too difficult.
Posted by Unknown at 11:05 am No comments:

Mudjimba Hotspot on the way

Finially progress has been made to get the final Maroochy hotspot in place at the Mudjimba Caravan park. It was a case of asking the body corporate of the Santorini building very nicely if we could use their roof as a repeater point for our wider area wireless network.

This way we have managed to put 5 of the 6 sites on our own infrastructure. Only Coolum relies upon a third party DSL service that is currently running at 99.18% availability as opposed to the 99.99% average the others are getting.

I will focus on installing similar hotspots in Noosa and if applicable - Caloundra. That way will have key coverage in most areas along the coast. Who knows, I may target other parks in SE QLD.
Posted by Unknown at 8:10 pm No comments:

I'd like to say a special thank you to Ben Johns for going out of his way to help solve a problem I had logging on to AccessPlus at the hotspot in Coolum (at the caravan park). He was especially patient, and talked me through several possible solutions on the telephone. When these didn't work he went to Coolum to check the hotspot was functioning properly, then even came to check out my laptop. I now have it working smoothly. After doing all this, I, for one, know a bit more about wireless networking, and I am sure Ben will have more answers when the same problem happens to someone else.

The hotspot is a great service, especially as I am able to get information I need while away on holiday.

Thanks for the initiative.
Gratefully
Deanna Ross
Posted by Unknown at 10:56 am No comments:

Colubris not playing the game

Many people who operate 'with' the Internet, such as the poor individuals who slave away in the background to make sure you can read this blog, know of and generally abide by RFCs.

An RFC is a 'Request For Comment'. The wikipedia definition is as follows:

With that in mind imagine how surprised I was when I discovered that a these Colubris CN3200 Access Controllers I'm playing with do NOT abide by the applicable RFCs. They do something that is very sinister and anti-competitive to say the least.

What they have done is alternated the values sent back to the RADIUS. "So" you might say? These two values are AcctInputOctets and AcctOutputOctets (same for packets, but that doesn't bother me as much). These values are Uploads and Downloads - everything done upon the Internet involves a combination of these two activities. The particular RFC is 2866 if you're that bored.

Now I work with Cisco and Mikrotik software and hardware. Both of which abide by the appropriate RFCs thus playing by the rules. Toss in a Colubris unit and it complicates and undoes this harmony. Now I have to run up another RADIUS box with special modifications to allow me to translate the swapped values to the correct ones in my database. A waste of time and resources when they can simply do what is expected.

Their response when I queried them about this was that "99% of their customers don't have a problem". You can guess my reaction.

My suggestion to you is that if you are in the market for Hotspot Access Controllers - avoid Colurbis. They're welcome to do innovative things but voiding industry accepted practices is unnecessary.

UPDATE:
Well that was a whole lot of time and effort for nothing. I jumped through all the hoops identifying and providing all the evidence they wanted. Compared it against Cisco accounting methods and everything.

Got a call from their Australian product engineer saying "it's a matter of interpretation". He's referring to the RFC and from what perspecting the accounting to be taken. I guess Cisco isn't a good enough de-facto standard.

They're going to try and put it through as a 'product enhancement request' but there has to be a valid business case behind it - and apparently mine isn't particularly valid - bearing the fact that data usage is what costs money in Australia, not time.

My suggestion at this stage - DO NOT USE COLUBRIS if you wish to run multiple brands of NASs with data based accounting.

Posted by Unknown at 9:52 pm No comments: