After a relatively smooth relocation of servers and reconfiguratoin of the 56million gateways spotted all over the east coast I had breakfast and then went and did 16 more room installations at the Peninsular resort. Only one room had a problem, no dialtone what so ever - so I guess I need to have that looked at. Got back into the office at around 5:30pm only to be met with a dead site that's in the Gold Coast, looks like I'm going for a road trip tomorrow.

Speaking of tomorrow, we're having a seminar where all the Maroochydore/Mooloolaba accomodation managers are invited to attend - same as the one we had a while ago in Noosa and just recently in Cairns. That starts at 4pm, so I have to fit four hours on the road with repairs and a stop over in Brisbane between 8am and 3:30pm.

I've already booked my Friday morning. I have to talk someone through the process of ripping out their network and redoing everything in the inclusion of a firewall. Mind you that this person is in Yeppoon and if it all turns to shit, I'm up for a 8hr drive up on the weekend.
Posted by Unknown at 7:55 pm No comments:

So here I am at 4am in the morning waiting for someone to bring a server over so I can shove it in a rack and then proceed to modify 56million sites to suit it. Being in the IT industry I find myself doing this often and honestly I believe its a sign of a failure - there should be failover systems in place so that I can be doing this kind of shit whenever I feel like it and not in the middle of what could of been dreams of nekkid females and whatnot. Truely gammon.

At least I have some time to read yesterdays paper...
Posted by Unknown at 4:03 am No comments:

On the weekend my webserver got haxored by some scriptkiddie. Made the link it was on a bit saturated, too many connections. Now I have to recover a server, pain in the arse. Doesn't appear that any data was compromised, looks like some IRC bot was installed and was used to relay files or something. Typical.

BF2 Comp
We got slaughtered by 6Pack on the next level of the Battlefield 2 comp. They pwned us in 10min...

Mothers Birthday
Was the mothers birthday yesterday. Mick and I gave her a watch, she has 10 and they're all broken. So hopefully this decent one will last.

Timber Screens
Finished the screens, look fantastic. My next project will be to get a screen door for the front enterance. I like having it open but I don't like all the bugs getting in. Stupid fish aren't eating them :\ After that it'll be some sails for covering the cars and finishing up the exterior repairs and painting.
Posted by Unknown at 9:22 pm No comments:

Got the screws for the timber screen this morning from a heavily populated Bunnings Store. Amazing how many people must be renovating their houses etc, I can see why hardware stores are now the largest shopping centers around. Didn't take much to finish the screen after that, now I have to work out how to do the more tricker screen that has to merge with a handrail.

Once I've done the screens I'll organise an industrial floor sander and take the paint off the floors and look into varnishing it. I think it might turn out to be quite expensive but I reckon it'll come up really nice. I'll paint the outside wall a dark Cumberland blue/grey and the ceiling white, that should help draw the outside in. After that I just need to install a power point above the BBQ area and the outside deck area is complete, apart from a new handrail or three, and some facia boards, and a new persplex roof... *sigh*

Little Birdy is playing at the Sands Tavern in Maroochydore on Saturday, 5th of November. I think I'll be going to that, don't mind her stuff. Now to find some young lady to take along so I don't look like some loney ghey dude.
Posted by Unknown at 11:03 pm No comments:

The start of our summer has been marked by westerly winds blowing hot dry air from our inland dust bowls straight into the pilot flame in my gas water heater. As one would expect this would blow out the flame and disrupt the normal functioning of the heating system. This in turn provides me with nothing but cold water in which to cleanse myself with. I guess it reminds me of camping...

Lastnight our game clan were talked about by the folks on the Gamestah chatback online radio segment. Was pretty funny because we're a bunch of north Queensland bogans that have made it to the big league in BF2. Who'd think that online gaming would become an e-sport with commentary and all. Where's my Nike contract?
Posted by Unknown at 8:59 am No comments: 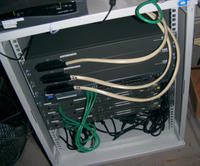 Almost completed the installation the SMC VDSL equipment at the Peninsular Resort at Mooloolaba (Queensland, Australia). As mentioned before we mounted the equipment and had everything ready to go for the phone guys. Well they should finish the line terminations to the Splitters today and everything will be all go for the core equipment.

Now I have to go through a few installations of the CPE (Client premises Equipment) with Peninsular's maintenance guy to make sure he knows what to do.

All the equipment including cabinet, Access Controller and DSL Router came to around $12,000. Labour is at about $2000 not including room installations. Compared to the cost of the PBX system which was over $50,000, our system is pretty cheap, particularly when looking at the revenue generated from it compared to the phone system.
Posted by Unknown at 9:22 am No comments:

Nothing special about today. Willow was back with us again for the Peninsular installation, basically sticking the VDSL switches into the cabinet and then making sure it all hooked up okay and the internet was working. Have to wait for phone guys to finish connecting it all to the phone system, which will be late this afternoon or tomorrow morning.

In this mornings coffee conversation with Willow; she suddenly came out and asked if I had a girlfriend. I know she's has a boyfriend (his name is Ben too, must be some awesome lad) so it sparked my interest as to why she wanted to know. The tone and pace of the question expressed some motive other than small talk, it was a planned question. Maybe she's matchmaking, I wouldn't mind.

Spent the afternoon tidying up and organising site inspections for tomorrow. All ready for the next major rollout. One day I'll have these rollouts for the VDSL equipment down to a fine art so I don't have to make return visits to each site, can only imagine what it would be like doing them all over Australia.
Posted by Unknown at 4:00 pm No comments:

Had to go down to South Port and conduct a site inspection at a 87 appartment building (Ocean Sands). Thought I'd take advantage of one of the views and got this pic of the $25m yacht 'Janice of Wyoming':

It's the one just to the left of center, with the huge mast behind some trees. Gives you a good idea on just how big that 130m long lump of aluminium is. More information can be found in this Sea-Spray article (PDF).
Posted by Unknown at 11:07 am 4 comments:

A weekend of work

It was time for getting stuck into the house renovations again. Mick had taken two weeks off to do it and still wasn't done thanks to playing BF2 all the time. So we got stuck into finishing off the screens this weekend and also filled in the newly dug greywater hole in the rather steep backyard. The screens came up looking pretty good and so far the grey water hole is holding up okay. 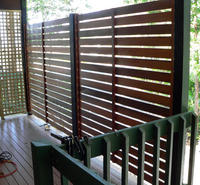 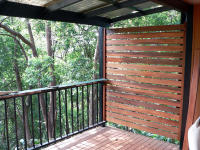 Tonight is the grand final NRL match between the Wests Tigers and the North Queensland Cowboys. Since I'm originally from Townsville, I back the Cowboys all the way. I went to many of their first matches while I lived up there. Only now have they made it to a grand final match so I'm pretty chuffed. I'm well prepared for the game, got a carton of beer, bag of chips and the TV is all warmed up. I would have loved to have been able to be in Townville to watch it with my mates and then hit the town afterwards.
Posted by Unknown at 5:40 pm No comments: