I forgot about Roma

I wrote about Townsville and Bundaberg and not Roma... The installation there was straight forward - lots of drilling of holes and snaking cords about. Otherwise the phone guy did his job fine and that was that.

It was at the Overlander Homestead Motor Inn Roma.
Posted by Unknown at 4:46 pm No comments:

The installation at the Townsville Coast Guard was finalized on Tuesday (18th April). Dave checked out the signal from the Quarter Deck which showed up as strong and very usable - meaning that the area between the Casino to Anzac Park should be well covered. You may even pick up signal further along the strand however the Mariners North building will block most of the signal in that direction. 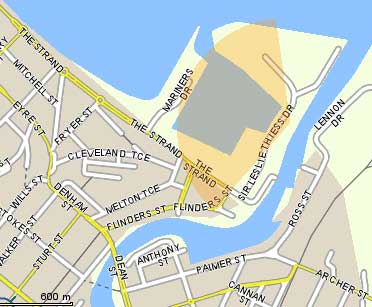 Posted by Unknown at 6:12 pm No comments:

The completion of the Boulevard Lodge install makes three hotel sites and one marina site active in Bundaberg. It would make it the third most covered area outside of Sunshine Coast and Brisbane.

The locations are as follows:
The Boulevard is a fairly new property (4yrs since construction) thus the facilities are in good condition and everything is modern. It now has a VDSL based in-room broadband system with wireless access throughout the common areas.

The installation was straight forward and was fairly simple to neatly install the in-room equipment. The location of the phone system made for space constraints, had to sit the cabinet on the floor. Hardly had enough space with the inclusion of the Austar rack. Heat was a concern so I lifted a ceiling tile to allow hot air to escape.

The installation was done by Willow and myself, Phones@Work did the phone system modifications.

While time was in short supply, Willow and I still managed to go on a tour of the Bundaberg Rum Distillery. Couldn't take a camera into the place because of the amount of alcohol present (fire is a bad thing) and it was also deemed a food preparation area. Otherwise the products came a with a nice tour discount - I purchased a bottle of Royal liquor for $33AUD.
Posted by Unknown at 5:48 pm No comments: