Woke up to the sound of SMSs hitting my phone at an alarming rate - something was dying back at the office and the Network Management Station (NMS) is making sure that I feel guilty about it. After quickly showering my beautiful body, drinking breakfast and feeding the fish (the little bastards just float around on their arses all day pecking at the occasional bug) I rush to the office to find Don fiddling about in the machine room unplugging suspect networks from the main links. First signs of a virus infection.

Turns out that one of our co-lo subnets was pumping out shit faster than I can scoff down pints on a Friday arve (/me takes swig of a Speights Gold Medal Ale). So after disconnecting that we trace through the logs, find the server in question and notify the client. Then we h4x0r the box and run a bunch of antivirus removal tools and whatever else that takes our fancy. Eventually we cured what ales it (/me drinks more ale).

While all this was happening, Dave and I were doing tag team battle with a mail virus that presents itself as a zip attachment. We netted so many that we had to manually purge the filth from our mail filters file system. At its peak we had 3500 emails in the queue totaling 350Mb, it took 3hrs to clear it all out after we fixed everything up.

Once I had all this done I ate me bacon/chicken/avo filo for lunch and then began the normal day at 1pm, catching up on the usual reading of slashdot and giving shit to my mates on irc. But really, it was working *wink*
Posted by Unknown at 4:11 pm No comments:

It seems that there's a big push in the Web Application sector at present. AJAX (Asychronous Javascript and XML) is the new tech in town and everyone is quickly rushing their applications based upon the technology out their door. I don't mind a bit since its all based on open standards and thus there are Open Source applications available for me to play with.

Two such applications that I'm playing with at the moment are Zimbra and SugarCRM.

Zimbra is pushing e-mail and collaboration software to new heights. They're taking what Google started with their Gmail and Blogger and merging it with current collaboration tools and methods to come up with a modern, scalable and cross-platform suite that promises to change the way we communicate in the work place.

I have installed and set up the latest version (Beta 2) as my mail host for naturalnetworks.net. So far its going quite smoothly, however there are issues getting it to work normally through a firewall with 1-to-1 NAT, it's pretty insistent upon its IP addressing and DNS. I read through the Zimbra forums and it would appear that the main issue would be with the way it uses IPTables to redirect ports - it might be getting confused and could be double NATing in a way.

The next release won't depend on the firewall, instead it will startup with root permissions and then suid to a user - similar to many other network applications. The reason for doing this is because only the root user is allowed to open ports below 1024. Another positive reason for not using IPTables is because only Linux has it, FreeBSD and others don't have it, or normally don't use it.

Update: I have since upgraded to the 'M2' release of Beta 2 and the issues I was having with the remote access have all been resolved. M2 has added a few more nice tweaks to the web user interface and various other additions listed on the Zimbra forums in the announcement.

CRM (Customer/Client Relations Manager) software has been around for quite sometime now. CRM software is usually designed for use by sales people and perhaps marketing as well - probably because traditionally they're the ones who are continuously facing the client. However many other features have crept into the standard recipe for a good CRM package, including interfaces for support/technical staff and project management. This is expected since things have shifted from a sell and forget attitude to developing a continuing relationship one.

This brings me to SugarCRM, a suite of modules that make up a complete CRM package. I'm using the free to download and use Open Source version - the main differences between the free to use one and the pay to use is support and a few other little things that make its integration with other existing systems easier. I'm not a sales person but I did do a bit of marketing and project management study while at Uni and Tafe - so from what I can gather from the suite is that its pretty comprehensive and sticks to the simple bare bones approach to getting the job done. If you want more detailed/complex structuring of information then it wouldn't be too difficult to modify it - just need to find a PHP developer (most decent Web Developers should know it).

SugarCRM Interface
Posted by Unknown at 12:28 pm No comments: 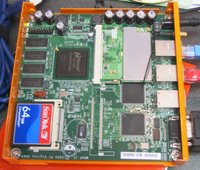 Posted by Unknown at 1:09 pm No comments: