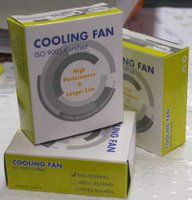 The three new 40mm fans arrived from PricePoint this morning. I'm focusing on the fans because of two things:

1. HTPCs generate heat - HDDs, DVB-T cards and CPUs that are in constant use produce lots of heat.
2. No one likes a noisy box sitting in their lounge room - fans can be the noisest items in a PC.

There is a balance between noise and heat - faster fans remove heat quickly but make more noise, quiet fans don't remove heat as fast. I opted for quiet fans because the Epia platform is inherently cool - low power normally equals low temperature. My main concern is how much heat the hard disk and DVB-T card will generate. 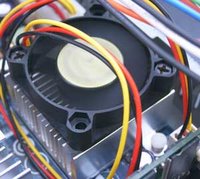 The Morex procase 2699 comes with two 40mm fans that sit under the PCI card (riser) and directly behind the HDD - basically where a lot of the big hot bits live which is good. The two fans are 'daisy chained' together so they can use the single system fan header on the M10000 board. 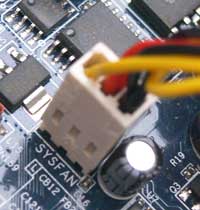 Because of this only one fan has its RPM sensed and the other fan simply piggy backs on the red and black power wires. So I had to get the two new fans and solder the red and black wires together where they meet the mainboard connector.

Once I had it all together I started it up and was pleasantly surprised at how quiet the new fans were. While they only push 5.4 cubic feet of air per minute they are hardly louder than a gentle breeze. Great for use in a lounge room where for one reason or another everything seems to be louder.
Posted by Unknown at 11:05 am