Haven't been that far north for quite sometime

Today I made my most northern journey in over 10 years. The last time I went up there was for holidays to Mission Beach -- I remember white water rafting and mango daiquiris, thankfully not much more.

The drive up was quite good as there was not a lot of traffic around 7:30am. I was tempted to stop in at the Frosty Mango for a smoothly but I resisted the temptation as I was going to spend most of my time sitting on my ass anyway. It wasn't until yawning many times on the way back that I relised that I hadn't even had a coffee! I remedied that as soon as I got to Tim's place.

Cardwell is pretty much the same as it was when I was last there as an 8 year old kid. Except for the large marina/resort less than 5min south of the township. Typical reclaimed land deal, sticks out like a sore thumb and all the buildings are made to the same boring design. Anyway, my main purpose was to check out the Marina and Resort and make plans for an eventual installation. Not make small talk with the rather attractive resort receptionist who I discovered was a Cardwell native, never caught her name though.

The installation will be a slightly different one. Essentially it will entail getting a broadband feed to a point where its available and redeploying it via wireless to the Resort and Marina where it can then be fed out to the clients. We use a similar configuration at the Keppel Bay Marina just on a larger scale.

Its odd walking into these places as someone from 'Brisbane'. They treat you like your from some other world and that you are there to either dominate them or act dumb. Considering that that actual person I had organised to meet went out fishing and left me with some random without notifying me isn't a good impression of you 'northerners'.

Got stood up again by the meeting I rebooked yesterday, this time I called them before getting too far... Hopefully I'll have better luck tomorrow. 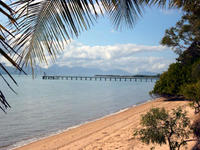